Birds,  bees …..and all manner of things!

Hanson Bay Wildlife Sanctuary in collaboration with Kangaroo Island / Victor Harbor Dolphin Watch presented “Under Southern Skies”  – a snapshot of conservation programmes and displays on Friday 18th  August. The National Science Week event “Under Southern Skies” highlighting the importance of conservation work on the South Coast of Kangaroo Island and celebrating Science in our community, was a stunning success …… under southern skies, in close proximity to our magnificent Southern Ocean!

From the opening address by KI Commissioner Wendy Campana and Mayor Peter Clements introduction and “call to arms” through to the close, the large crowd was enthralled and uplifted by a series of quality presentations about fascinating conservation programmes.

Dr Dave Ellis outlined the brilliant conservation programs conducted at Hanson Bay with a particular focus on the endangered species – Green Carpenter Bees and Rosenbergs Goannas. Danny Male from NRM followed, providing brilliant insights into the effects of ocean currents upon KI and how they relate to our Marine Parks. Another absolutely fascinating presentation fully engaging the audience, as did Tanya Rosewarne and Steph Wheatley, senior rangers at Seal Bay Conservation Park. Their presentation included maps of fascinating sealion foraging movements around SA and Seal Bay in particular. Dave Irwin’s talk on the admirable conservation and rehabilitation work of Raptor Domain outlined perfectly the juxtaposition of Ecotourism and conservation. Mel Pepper outlined the work of the Wildlife Rescue Network and the presentation concluded with Dolphin Watch’s Tony Bartram presenting information about South Coast dolphin movements and the role Citizen Scientists and the community at large can play in collecting vital data. The evening concluded with an entertaining raffle draw.

All in all a brilliant example of cooperation between Hanson Bay and Dolphin Watch, making use of funding provided through the National Science Week SA Community Grant to stage a wonderful event highlighting the tremendous opportunities KI’s pristine environment offers to educate the world.

Congratulations to Manager Kelly, Mick and team for hosting a brilliant Science Week event, providing a great collaborative model for the future. In a magnanimous show of support the Hanson Bay staff donated their services for the night, including provision of a delicious meal.

Thankyou to all for the outstanding support, contributions, sponsorship and making the effort to attend.

Roll on “What IS it about whales? (large and small)”  National Science Week 2018! 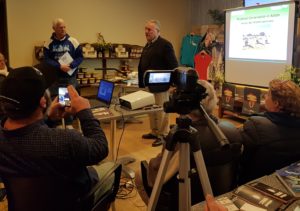